The April 2013 issue of AMRM is now available as a back issue.
This was our 50th anniversary (1963-2013) issue and has been expanded to the
maximum number of pages we can have printed! 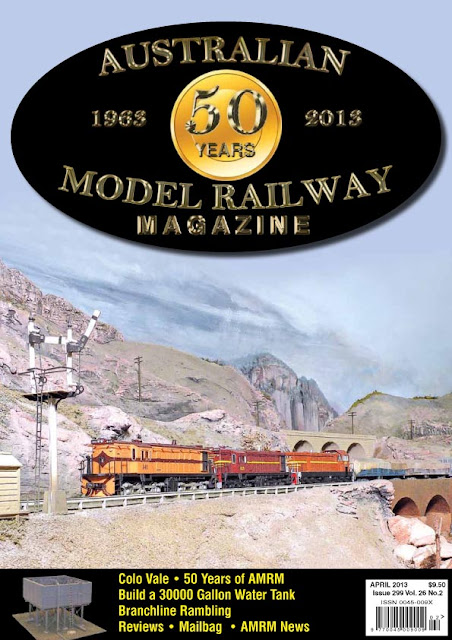 The contents of the April  issue

To mark our 50th year of publication, we are featuring a layout that has marked a number of AMRM milestones in the past, Brian Parry's Colo Vale. This fine layout has been featured on AMRM's first colour cover in 1980 and was also the feature layout for our 25th anniversary issue in 1988. The advances in production values AMRM has achieved in the last 25 years is amply illustrated when this article is compared to the previous one! 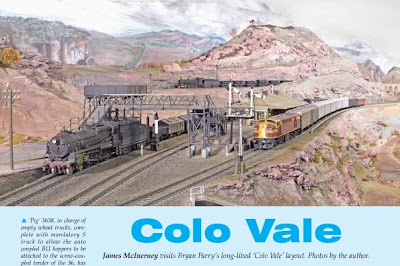 The general contents of this issue are generally on the theme of 'looking back' with the major component being the first part of Bob Gallagher's three-part history of AMRM, this installment covering the early years before he took over in 1975.

As an insight into the difficulties facing the pioneers of the hobby, Garry Kahler has written an article outlining how he scratchbuilt a NSWGR ACX composite sleeping car in HO scale, using materials and techniques not much changed since the 1960s.

Adapting and modifying proprietary kits has been a theme from the very early days of AMRM and Peter Jarvis continues the theme with the first part of a two-part essay on modifying and detailling the Casula NSWGR cast iron water tank kit. 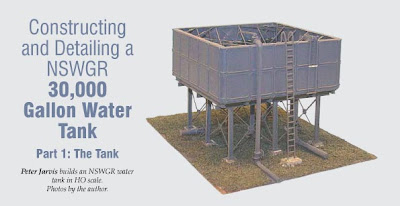 However, not everything was 'golden' in years gone by. One of the biggest advances over the last 20 years or so has been the development of digital control systems. David Mitchell shows how easy it is to fit a DCC chip to a proprietary diesel.

Individual models are but a 'means to an end' to a fully working and scenicked layout. Craig Veitch continues his layout building saga with the latest installment detailing how he laid his track. 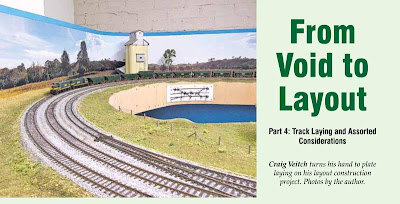 This issue's expanded Gallery section features some of the models constructed by one of the true pioneers of the hobby, Howard Armstrong, during the last 50 years. 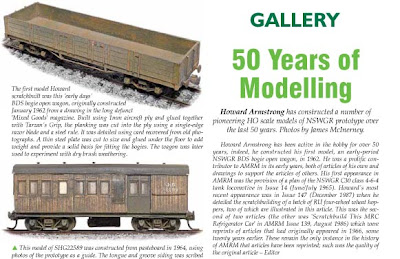 All this, along with Beyond the Fence, Lineside, building modern structures, a useful workshop tool, solving the Eureka HUB car 'green window' problem and the return of Branchline Ramblings should give you plenty of reading entertainment till our next issue, which will be our 300th!

Then there is the seventeen pages pages of reviews and new product news, including a Prototype File and tandem reviews of the SDS and Southern Rail Tulloch 10,000 gallon rail tank cars, plus  reviews of the Eureka HUB cars and many other useful items, which should somewhat satisfy the need to find out about 'the latest'.

Due to lack of space, we have had to hold the next chapter of Ian Black's series on constructing the Southern Aurora, covering the MHN passenger brake vans, over till next issue.

Posted by Australian Model Railway Magazine at 13:02 No comments: