The February 2015 issue of AMRM is now available as a back issue from SCR publications. Back issues of the digital version are available from Zinio 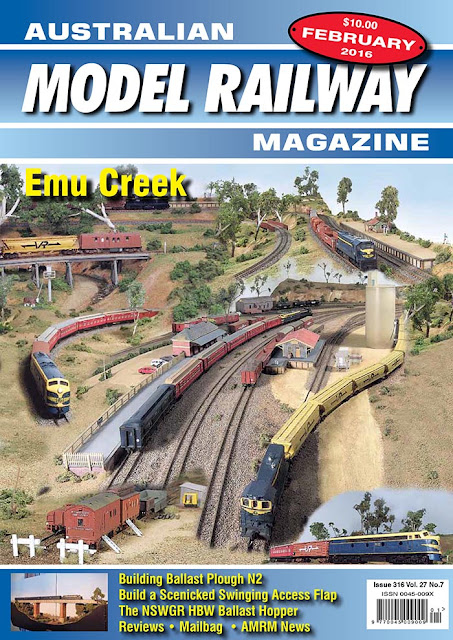 The contents of the February issue

After a run of (very fine) NSW layouts, it is time to go south of the border for February's feature layout. 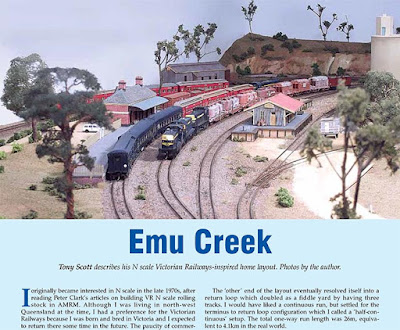 Tony Scott describes his, now-demolished, N scale home layout, recalling the glory years of the 'blue and gold' era of the Victorian Railways.

Continuing the VR theme, Peter Ennis describes another of his VR wagon models.

For those constructing layouts and looking for a solution to the ongoing problem of access, David Bartle has an interesting (and scenically attractive) solution to the problem. 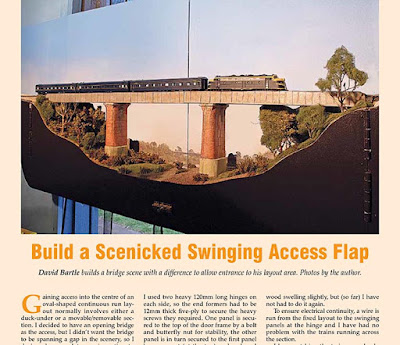 A bit of light entertainment, but with a serious edge, comes from Robert Gorrell, with a riposte to Trevor Hodges' recent In the Loop: Image Problem? What Image Problem?

The numerically largest section of our readership has not been forgotten though, with a few articles exploring various aspects of modelling the NSW railway system.
Ian Dunn has put together a Prototype File on the NSWGR's HBW four-wheel ballast hopper, essential reading for anyone building the Peter Boorman's Workshop kit (also reviewed in this issue) and of interest to anyone else who likes steam-era NSW rolling stock. 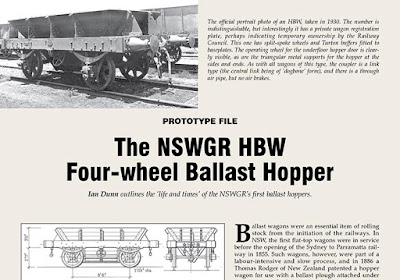 We are also trying out a new idea, an 'extended review' of a commercially available kit that goes beyond the areas usually covered by reviews. We have taken a Model 'N More building kit and not only reviewed the kit 'as provided', but have also shown how it can be modified to more closely resemble the prototype and how to achieve this, including painting and weathering. 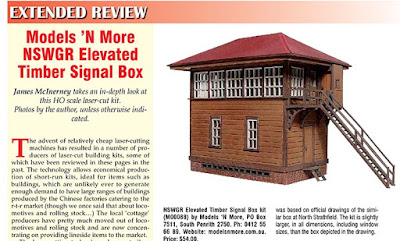 This is unlikely to be our last 'extended review'!

We also have the usual 'regular' features, including another Beyond the Fence from Maikha Ly, describing some very 'modelable' buildings in Wolseley SA and the latest In the Loop from Trevor Hodges, describing his adventures dabbling in commercial kit building. 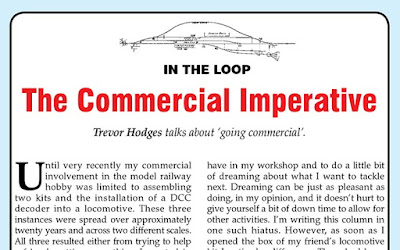 And then there is Gallery, taking an unusual departure this issue with a description by Les Fordham of an O scale outdoor layout that existed a very long time ago in Cheltenham (NSW) a northern suburb of Sydney. 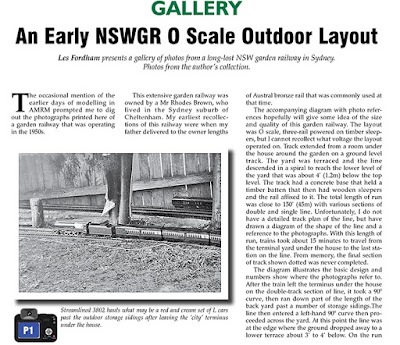 The Reviews section covers a plethora of items that will be of interest to many readers, including the r-t-r Auscision NSWGR 43 class, Bendigo Rail Models Victorian P class and Haskell WA L class diesel locomotives. Also reviewed is a VR 30' goods shed kit in HO scale from new producer, Model Train Buildings, the aforementioned HO scale NSWGR HBW four-wheel hopper wagon kit from Peter Boreman's Workshop, new micro speakers for DCC installations from Model Railroad Craftsman and last, but not least, modelling inspiration in the form of two books (An Australian Locomotive Guide-Second Edition by Peter Clark, and The Daylight by Chris Banger) and a DVD, Australian Railway Historical Society Archives Collection Volume 1 The Alex Grunbach Films, produced by Belbin Video.
.
Despite it being traditionally a quiet time for announcements and new releases, the Recent Releases and News sections still manage to run to five pages, with a major release announced that will be of great interest to VR modellers. It may pay dividends for those VR enthusiasts to plan on attending the Corio exhibition over the weekend of 23-24 January!

Posted by Australian Model Railway Magazine at 14:53 No comments: